Feature Page (2)  Cowboys and Their Sidekicks

How Many Of These Cowboy Stars Do You Remember? 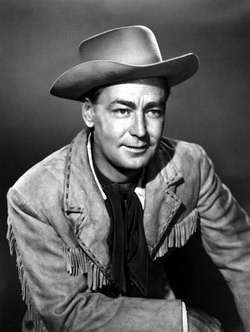 ALAN LADD
A vehicle which made Ladd's career: the 1942 adaptation of Graham Greene's novel This Gun for Hire in which he played "Raven," a hitman with a conscience.[5] "Once Ladd had acquired an unsmiling hardness, he was transformed from an extra to a phenomenon. Ladd's calm slender ferocity make it clear that he was the first American actor to show the killer as a cold angel." – David Thomson (A Biographical Dictionary of Film, 1975) [8]

Both the film and Ladd's performance played an important role in the development of the "gangster" genre: "That the old fashioned motion picture gangster with his ugly face, gaudy cars, and flashy clothes was replaced by a smoother, better looking, and better dressed bad man was largely the work of Mr. Ladd." – New York Times obituary (January 30, 1964).[8]Ladd was teamed with actress Veronica Lake in this film, and despite the fact that it was Robert Preston who played the romantic lead, the Ladd-Lake pairing captured the public's imagination, and would continue in another three films. (They appeared in a total of seven films together, but three were only guest shots in all-star musical revues.)