Siamese twins walk into a bar in Canada and park themselves on a bar stool.
One of them says to the bartender, "Don't mind us; we're joined at the hip. I'm John, he's Jim. Two Molson Canadian beers, draft please."
The bartender, feeling slightly awkward, tries to make polite conversation while pouring the beers.
"Been on holiday yet, lads?"
"Off to England next month," says John. "We go to England every year, rent a car and drive for miles. Don't we, Jim?" Jim agrees.
"Ah, England!" says the bartender. "Wonderful country... the history, the beer, the culture..."
"Nah, we don't like that British crap," says John. "Hamburgers and Molson's beer, that's us, eh Jim? And we can't stand the English - they're so arrogant and rude."
"So why keep going to England?" asks the bartender.
"It's the only chance Jim gets to drive.”﻿
(Liz W.) 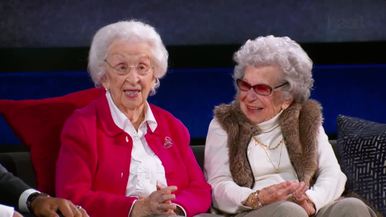 There were these twin sisters just turning one hundred years old in
St.Luke's Nursing Home and the editor of the Cambridge rag, "The Cambridge
Distorter," told a photographer to get over there and take the pictures of
these 100 year old twin biddies.
One of the twins was hard of hearing and the other could hear quite well.
The photographer asked them to sit on the sofa and the deaf one said to
her twin, "WHAT DID HE SAY?" He said, "WE GOTTA SIT OVER THERE ON THE SOFA!" said the other. "Now get a little closer together," said the cameraman. Again, "WHAT DID HE SAY?" "HE SAYS SQUEEZE TOGETHER A LITTLE." So they wiggled up close to each other. "Just hold on for a bit longer, I've got to focus a little," said the photographer. Yet again, "WHAT DID HE SAY?"  "HE SAYS HE'S GONNA FOCUS!"

With a big grin the deaf twin shouted out, "OH MY GOD - BOTH OF US?"
Way down in dat old swamp known as Louisiana, Bubba's old lady had been pregnant for some time, and now the time had come. So, he brought her to the doctor, and the doctor began to deliver the baby.She had a little boy, and the doctor looked over at Bubba and said, "Hey, Bubba! You just had you a son!" Aint dat grand!!  Bubba got excited by this, but just then the doctor spoke up and said, "Hold on! We ain't finished yet!" The doctor then delivered a little girl. He said, "Hey, Bubba! You got you a daughter!!!!" She a pretty lil ting, too....Bubba got kind of puzzled by this, and then the doctor said, "Hold on, we still ain't got done yet!" The doctor then delivered another boy and said, "Bubba, you just had yourself another boy!When Bubba and his wife went home with their three children, he sat down with his wife and said, "Mama, you remember dat night what we ran out of Vaseline and we had to use dat dere3-in-1 Oil?"She said, "Yeah, I do."  Bubba said, "Man, it's a damn good ting we didn't use no WD-40! 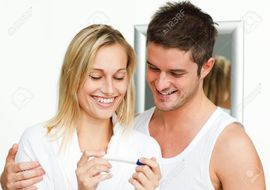 BLOND JOKE
The blond woman had been married about a year when one day the she came running up to her husband jumping for joy. Not knowing how to react, the husband started jumping up and down along with her. "Why are we so happy?" he asked. "Honey, I have some really great news for you!" She said. "Great" he said, tell me what you're so happy about." She stopped jumping and was breathless from all the jumping up and down. "I'm pregnant!" she gasped. The husband was  ecstatic as they had been trying for a while. He grabbed her, kissed her, and started telling her how wonderful it was, and that he couldn't be happier. Then she said "Oh, honey there's more." "What do you mean more?", he asked. "Well we are not having just one baby, we are going to have TWINS!" Amazed at how she could know so soon after getting pregnant, he asked her how she knew. "It was easy" she said, "I went to the pharmacy and bought the 2 pack home pregnancy test kit and both tests came out positive!"