(All contributions are greatly appreciated...as you can see,  most of my material comes to me from friends like you) 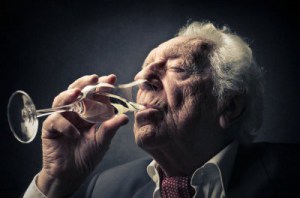 Three guys are drinking in a bar when a drunk comes in, staggers up to them, and points at the guy in the middle, shouting, "Your mom's the best sex in town!"
Everyone expects a fight, but the guy ignores him, so the drunk wanders off and bellies up to the bar at the far end.
Ten minutes later, the drunk comes back, points at the same guy, and says, "I just did your mom, and it was sw-e-et!"
Again the guy refuses to take the bait, and the drunk goes back to the far end of the bar.
Ten minutes later, he comes back and announces, "Your mom liked it!"
Finally the guy interrupts. "Go home, Dad, you're drunk!"
What can I say...Shear genius!
wish I thought of this 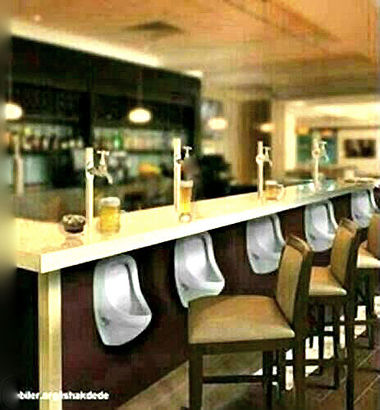 Must have been designed by an efficiency expert!
Probably increased beer sales 25% 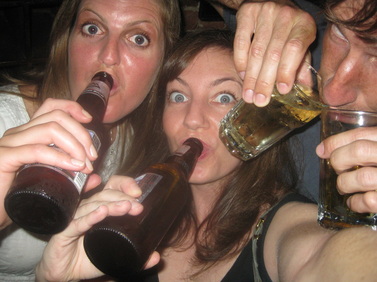 wo women friends had gone out for a girls night out, and had been overenthusiastic on the cocktails. Incredibly drunk and walking home, they suddenly realized they both needed to pee. They were very close to a graveyard, and one of them suggested they do their business behind a headstone or something. The first woman had nothing to wipe with, so she took off her panties, used them, and threw them away. Her friend however, was wearing an expensive underwear set and didn't want to ruin hers, but was lucky enough to salvage a large ribbon from a wreath that was on a grave and proceeded to wipe herself with it. After finishing, they made their way home. The next day, the first woman's husband phones the other husband and says, "These girls' nights out have got to stop. My wife came home last night without her panties." "That's nothing," said the other. "Mine came back with a sympathy card stuck between the cheeks of her butt that said, "From all of us at the fire station, we'll never forget you!" 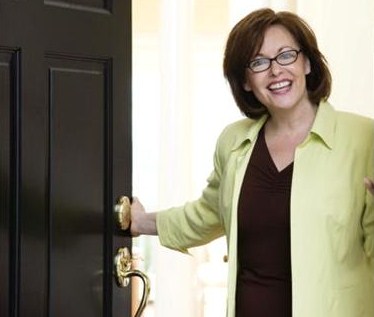 A guy was in a bar about as drunk as it's possible to get.
A group of guys notice his condition and decide to be
good samaritans and take him home.
First, they stand him up to get to his wallet so they can
find out where he lives, but he keeps falling down. He
fell down eight more times on the way to the car, each time with a real thud.
After they get to his house, he falls down another four times getting him to the door.
His wife comes to the door, and one guy says, "We brought your husband home."
The wife asks, "Where's his wheelchair?"
thanks Art B. 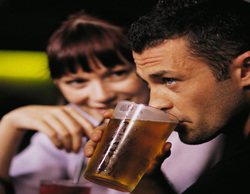 ﻿Critical Thinking At Its Best!﻿


﻿Woman: Do you drink beer?
Man:  Yes
Woman: How many beers a day?
Man:Usually about 3
Woman:How much do you pay per beer?
Man:  $5.00 which includes a tip
(This is where it gets scary !)
Woman: And how long have you been drinking?
Man: About 20 years, I suppose
Woman: So a beer costs $5 and you have 3 beers a day which puts your spending each month at $450.
In one year, it would be approximately $5400 correct?
Man:Correct
Woman: If in 1 year you spend $5400, not accounting for inflation, the past
20 years puts your spending at $108,000, correct?
Man: Correct
Woman: Do you know that if you didn't drink so much beer, that money could have been put in a step-up interest savings account
and after accounting for compound interest for the past 20 years, you could have now bought a Ferrari?
Man: Do you drink beer?
Woman: No
Man: Where's your Ferrari?﻿ 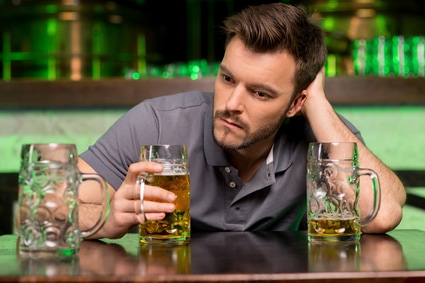 A little guy is sitting at the bar just staring at his drink for half an hour when this big trouble-making biker steps next to him, grabs his drink and gulps it down in one swig.
The poor little guy starts crying.
'Come on man. I was just giving you a hard time,' the biker says. 'I didn't think you'd CRY.'  'I can't stand to see a man crying.'
'This is the worst day of my life,' says the little guy between sobs.
'I can't do anything right.'  'I overslept and was late to an important meeting, so my
boss fired me. When I
went to the parking lot, I found my car was stolen and I don't have any insurance. I left my wallet in the cab I
​      took home.  I found my wife in bed with the gardener and my dog bit me.  So I came to this bar trying to work           up the courage to put an end to my life, and then you show up and drink the damn poison.'
FAIR USE NOTICE: These video's may contain copyrighted material. Such material is made available for educational purposes only. This constitutes a 'fair use' of any such copyrighted material as provided for in Title 17 U.S.C. section 106A-117 of the U.S. Copyright Law.