Lost In The 50's
Another Time, Another Place
(Received in my e-mail... Thank you Bill V.)
Here is a great video....taking you back to the wonderful 1950's era....
Truly "Another Time,  Another Place".
TEST YOUR BRAIN POWER!
(I found one obvious mistake in this video..can you find it..answer #1 at bottom of page.) 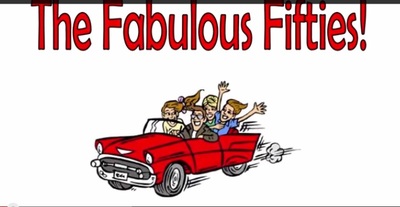 Mom used to cut chicken, chop eggs and
spread butter on bread on the same cutting board with the same knife
and no bleach, but we didn't seem to get food poisoning.

Our school sandwiches were wrapped in wax
paper in a brown paper bag, not in ice pack coolers, but I can't
remember getting e.Coli
Almost all of us would have rather gone
swimming in the lake or at the beach instead of a pristine pool (talk
about boring), no beach closures then.

We  all took PE ..... And risked permanent
injury with a pair of Dunlop sandshoes instead of having
cross-training athletic shoes with air cushion soles and built in
light reflectors that cost as much as a small car. I can't recall any
injuries but they must have happened because they tell us how much safer we are now.

We got the cane for doing something wrong at
school, they used to call it discipline yet we all grew up to accept
the rules and to honor & respect those older than us.

We had 50 kids in our class and we all
learned to read and write, do math and spell almost all the words
needed to write a grammatically correct letter......., FUNNY THAT!!

We all said prayers in school irrespective of
our religion, sang the national anthem and no one got upset.

Staying in detention after school caught all
sorts of negative attention we wish we hadn't  got.

I thought that I was supposed to accomplish
something before I was allowed to be proud of myself.

I just can't recall how bored we were
without computers, Play Station, Nintendo,  X-box or 270 digital TV
cable stations. We weren't!!  We went outside and found our friends
and used our imagination to create something fun.
and no referees!
Oh yeah .... And where was the antibiotics
and sterilization kit when I got that bee sting? I could have been killed!

We played "King of the Hill" on piles of
gravel left on vacant building sites and when we got hurt, mom pulled
out the 2/6p bottle of iodine and then we got our backside spanked.
Now it's a trip to the emergency room, followed by a 10 day dose of
antibiotics and then mom calls the lawyer to sue the contractor for
leaving a horribly vicious pile of gravel where it was such a  threat.

To top it off, not a single person I knew had
ever been told that they were from a dysfunctional family. How could
we possibly have known that?

We never needed to get into group therapy
and/or anger management classes. We were obviously so duped by so many
societal ills, that we didn't even notice that the entire country
wasn't taking Prozac!
How did we ever survive?

LOVE TO ALL OF US WHO SHARED THIS ERA.
AND TO ALL WHO DIDN'T, SORRY FOR WHAT YOU MISSED.
(THANK YOU LIZ W.)
Did you have any of these or use any of them
back in the 40's or 50's?
ITEMS WE USED EVERY DAY...
Here are some more random thoughts that pop in to my head.....

Old fashioned medical remedies
(Click on image for a excerpt from Wikipedia, the free encyclopedia
and other sources of information about each medicine)
My Recollections Of the Holidays  And How we Celebrated Them.......Late 1940's and early 1950's
On the 4th Of July, we would go to a neighboring town that had the best fireworks display in the entire area.  There were so many "oohs" and "aahs﻿".  We would go really early in the evening, with our blankets to sit on the ground, just to get good seats for the hour or so of fireworks display, which was put on by the local fire company. 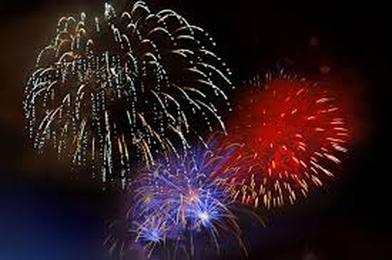 CLICK ON THE ABOVE IMAGE FOR AN AWARD WINNING SHOW 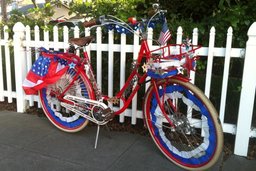 On the morning of the fourth there was a big parade in our town.  All of us kids would decorate our bikes with red, white and blue crepe paper and join in the parade.
Of Course there was Easter.  I remember so vividly hand dyeing hard boiled eggs for Easter, and how I looked forward to the Easter Bunny bringing me a large Easter basket filled with all kinds of goodies.  It wasn't a premade, store bought basket, but rather one made up by my parents with Jelly Beans, Robin Eggs candy, Marshmallow Peeps, and a really large coconut cream Chocolate coated Easter Egg.   And there was also a Panoramic Easter Egg which I would love to view on Easter morning.
﻿On Thanksgiving Day, my mother would set out a spectacular spread of food.  We would have about a 23 to 25 pound turkey.  She would ﻿specify that it be a hen turkey. (I guess Hen turkeys are more tender than a Tom.)﻿  She would stuff the body cavity with sage stuffing and the neck cavity with oyster stuffing , especially for my father who liked it.  She would serve this turkey with hot giblet gravy. There would be mashed sweet potatoes topped with marshmallows, mashed white potatoes, jellied cranberry sauce, several piping hot dishes of vegetables, nuts, a small tray of celery and carrot sticks just to nibble on. Plenty of hot rolls and butter﻿. ﻿Fresh perked coffee would be served along with homemade pumpkin pie.﻿ 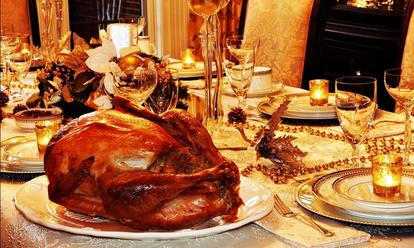 EVERY THING YOU COULD IMAGINE, A REAL BOUNTY
﻿We would have all of our relatives in for Thanksgiving dinner.  This amounted to about 13 people, who were my aunts and uncles, cousins and their children.
They would all descend on our home on Thanksgiving Day, in order to go to the annual Army and Navy football game in Philadelphia.  Almost immediately after dinner they would all fly out of the house to go to the "big game﻿", leaving my mother and a very few people behind to clean up the mess.﻿
Then came the biggest and best holiday,﻿ Christmas, the ﻿day we as children looked forward to from about mid November until it would finally arrive.﻿  ﻿When I was very young, we would look for the first snowfall by Thanksgiving Day...from then on there was nothing on our minds except Christmas and what ﻿Santa would bring us.﻿  Back in those days we believed in Santa Claus the Tooth Fairy and the Easter Bunny.  I remember the first time I probably discovered that there was no Santa when I was about six years old.  I was always made to go to bed early Christmas Eve, so Santa could come early an leave the tree and lots of presents under it.  How ever when I was about six I awoke hearing a noise downstairs, so I got up and went down the stairs to the landing  from which I could see our living room.  And what I saw was, my mother decorating the tree while my father sat across from it telling her where to put the decorations.﻿﻿﻿ 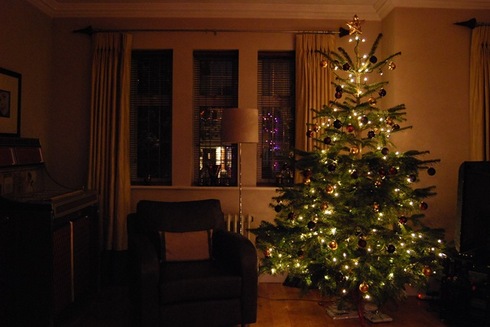 OUR TREE LOOKED SIMILAR TO THIS BUT WITH A LOT MORE TINSEL AND A OVAL TRAIN SET UNDER IT
﻿I had a Lionel train set that I love to run. It had a steam engine that puffed smoke and a whistle that was located on the transformer.  Every year I would get a new rail car added to the set at Christmas. I must have had 10 different rail cars .  There was a searchlight car, an operating cattle car, a operating lumber car,
a tanker, and several boxcars.  I would be entertained for hours just running the train and using my imagination.  Christmas also brought a visit from my aunts and unc﻿le on my fathers side of the family.  And every year it was the same gift, a long sleeved flannel shirt from my aunt Edith and $5.00 from uncle John and his wife.  I then had go and kiss my aunt on her cheek which I hated to do.  Remember, I was only six, and this embarrassed me to have to do this...but I did.﻿﻿﻿
﻿
Christmas Memories Toys and Music from the 1950s and 60s
Answer 1:  If you said the 1/2 dollar coin shown in the change was dated 1965..you are very observant
WHAT DO YOU REMEMBER?
GO TO THE BLOG AND PASS YOUR MEMORIES ON TO YOUR CHILDREN AND THEIR CHILDREN!